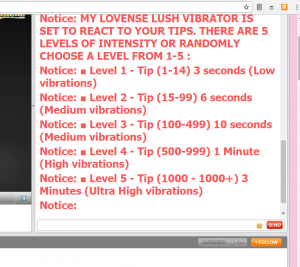 Most major webcam chat sites now support cyberdildonics play such that the viewers can remotely control the “smart sex toy” a model wear.  With the popularity of smartphones and people are started to be familiar with Bluetooth pairing (especially more and more people like to use selfie-sticks to take pictures), interactive teledildonics aka cyberdildonics sex toys are spreading all over online webcam chat sites.

We have seen remote controlled sex toys used in Sakuralive a few years back but it was relying on the cam site’s own software to implement the control. It’s self-contained and it hasn’t attract competitors to compete on this field.

By 2014, Ohmibod, the sound controlled vibrator  which dates back to 2008 when it was working with ipod, has configured it to work with Android phones and iPhones.  Since then, many cam girls started to use Ohmibod on webcam to get tips from viewers.  The models choose how intense the toy react by responding to the tip sound of the viewers.  This was a hugh success at first (as seen on Chaturbate.com) though later on many viewers believe that the models fake their reactions and doesn’t believe that the toy really react to the tip sound accordingly. This became very controversial and has divided the viewer crowd to love-it or hate-it.  See my post about the Ohmibod-fake chaos.

Roughly at the same time, Flirt4free has introduced Kiiroo to their site.  It wasn’t a hit because to fully enjoy the experience, the viewers are best to own a toy to receive the intimate reactions of the model.  It’s not cheap and even the viewer finally bought one for himself, there are not many other cam sites you can use it on, so it has very limited use.  Even now, Dec 2016, I can see 90% of the girls in the interactive section of Flirt4free are using Ohmibod while only a few still stuck with Kiiroo.

By 2016, Lovense started to pick up. See trend above.  Lovense is better than Ohmibod in the way that it’s not just reacted to sound.  Model can use an extension with the browser to set up the intensity and duration of the toy in respond to different tip levels. It’s definitely growing. It just need the PR of Lovense to work harder and be more innovative to add more features to make it fly.

Just now, I receive a notification from xlovecam that the top 300 cam models get a sound-reacted sex toy called Doreen. We are surely going to see a lot more remote controlled sex toys on cam in 2017!

2 thoughts on “Teledildonics on Cam”